JOSÉ A. ALVARADO JR.
Based in New York, USA


The Little Barbershop on Suydam
On a mid-July day in 2016, one of the hottest in New York City’s history, I wandered down Suydam Street in Bushwick, sweating from the unabating sun that left the white, cotton tee draped about my shoulders soggy and bothersome. As I continued my walk, I stumbled across the tiniest barbershop I had ever seen: it took up no more than the space of a single garage. "Lalo’s Barber Shop” was printed in red capitalized letters on the window. The door was locked. Confused that a sign on the door said "open," I looked at my watch and noticed it was 12:35 p.m. I figured the shop was closed for lunchtime, so I waited for someone to return, imaging the character that might own the place. Peering through the window, I noticed a variety of Puerto Rican curios: flags, an old license plate, a guitar with the Puerto Rican flag painted on its body, and a piece of timber crafted in the shape of the island. As a Puerto Rican myself, I hoped to relate to "Lalo". If he wasn’t much of a talker, I could always challenge him to a game of dominoes, a pastime in our culture, to help break the ice.

After a half-hour of peaking inside the shop and waiting patiently, a short man who looked like my grandfather appeared from around the corner. He walked to the barbershop, unlocked it, and with a hearty laugh, asked if I had come to trim my overgrown and untamed beard. I jokingly responded, “My beard is in fashion." We stepped inside and I began to ask him about the story behind this tiny shop at 397 Suydam St. This was the man I had been waiting for. Eladio Burgos, 77, has been cutting hair for the last 40 years at his Bushwick barbershop. He opened it at a time when the neighborhood was known less for its artistic residents and more for its wild energy. Clipper guards of various sizes and brands lay scattered on the shelf amongst photographs. Eladio spoke softly, smiling as he recalled some of the crazy events that would take place in front of his shop back in the 1970s. He told me about the gunfire and commotion that filled the air of the neighborhood and the salsa that would blast out of Chevy Bel Airs. Eladio also told me about the relationships he has with loyal customers, some of whom have been coming for haircuts since he first opened for business. We talked in his shop for several hours and I didn’t leave until after the sun had slipped below the apartment buildings which sit along the M Train tracks. 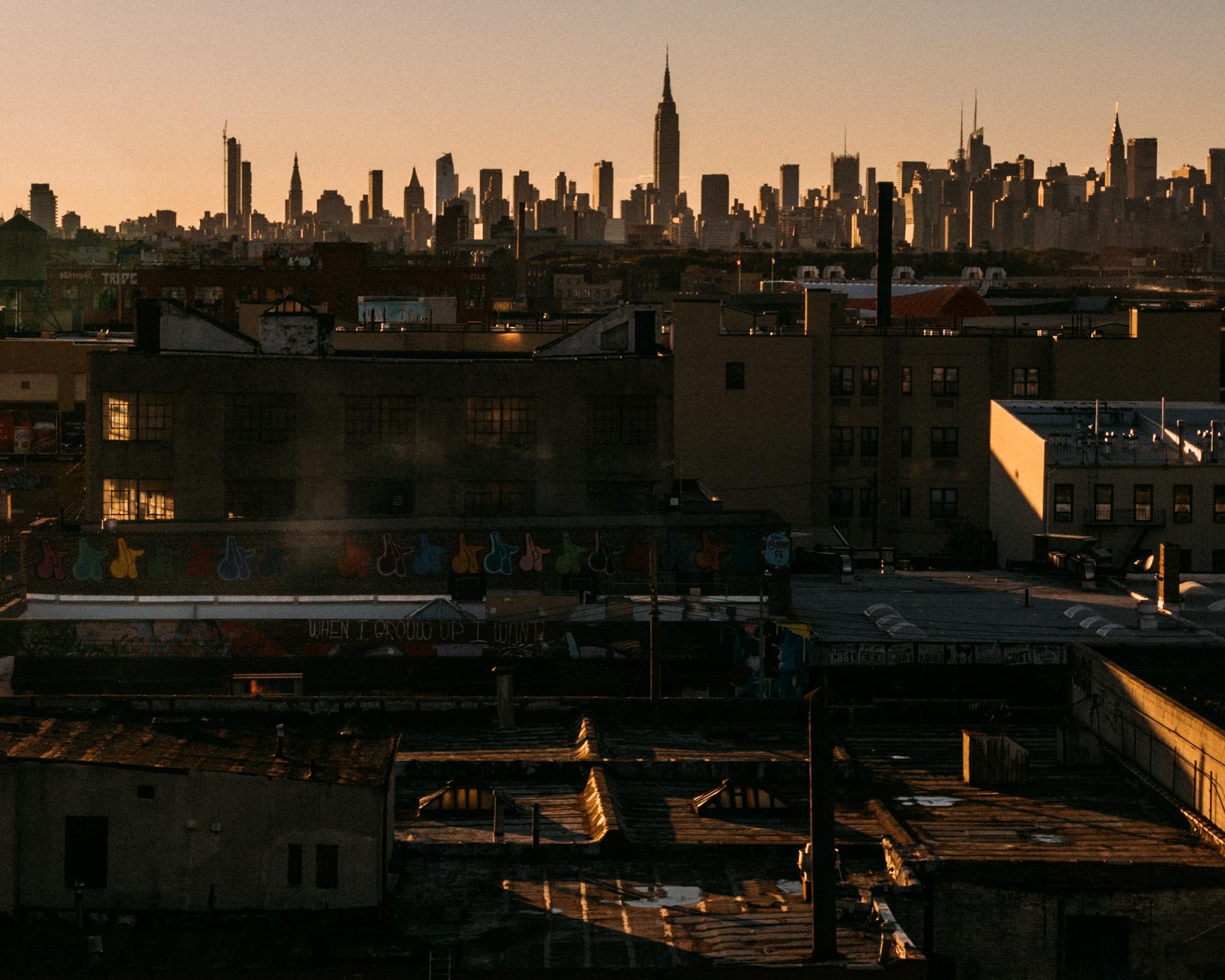 As commotion radiates off the cars and buildings on Wyckoff Avenue and fills the air of northern Bushwick, the sun set's over the neighborhood that Eladio and his shop have called home for over four decades in Brooklyn. 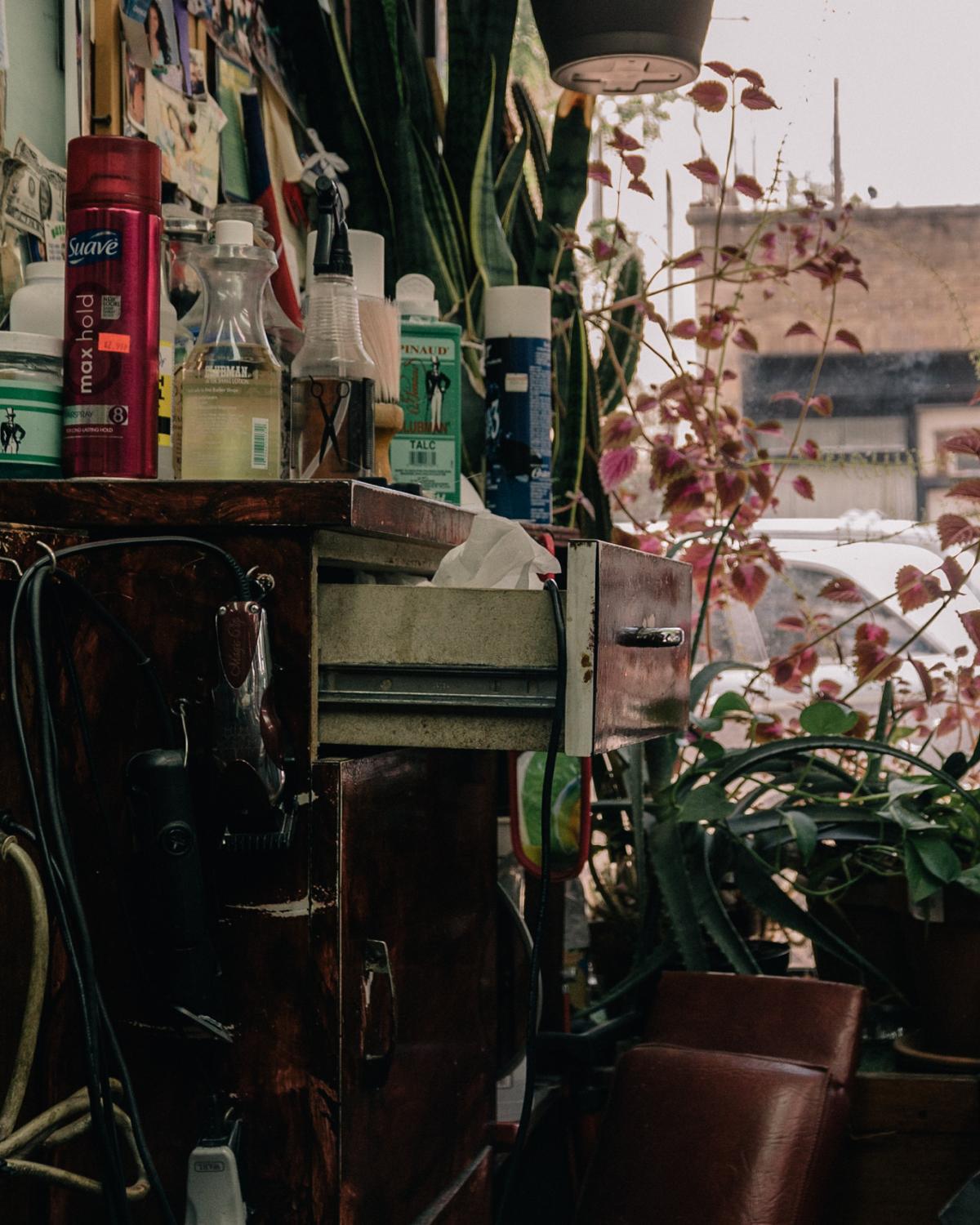 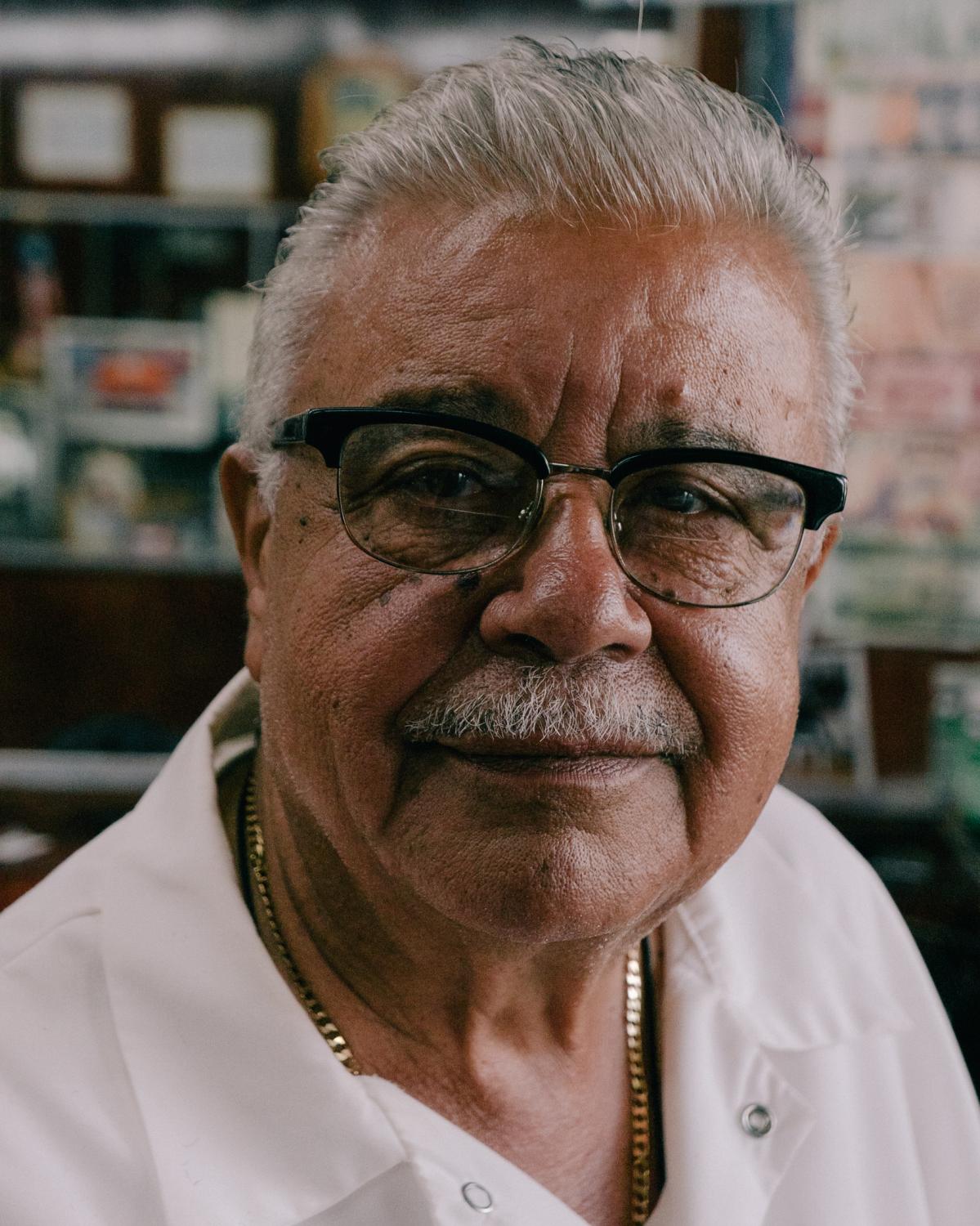 Eladio Burgos, 77, sits for a portrait as he waits for customers at his one seat barbershop on Suydam Avenue in the Brooklyn borough of New York City. 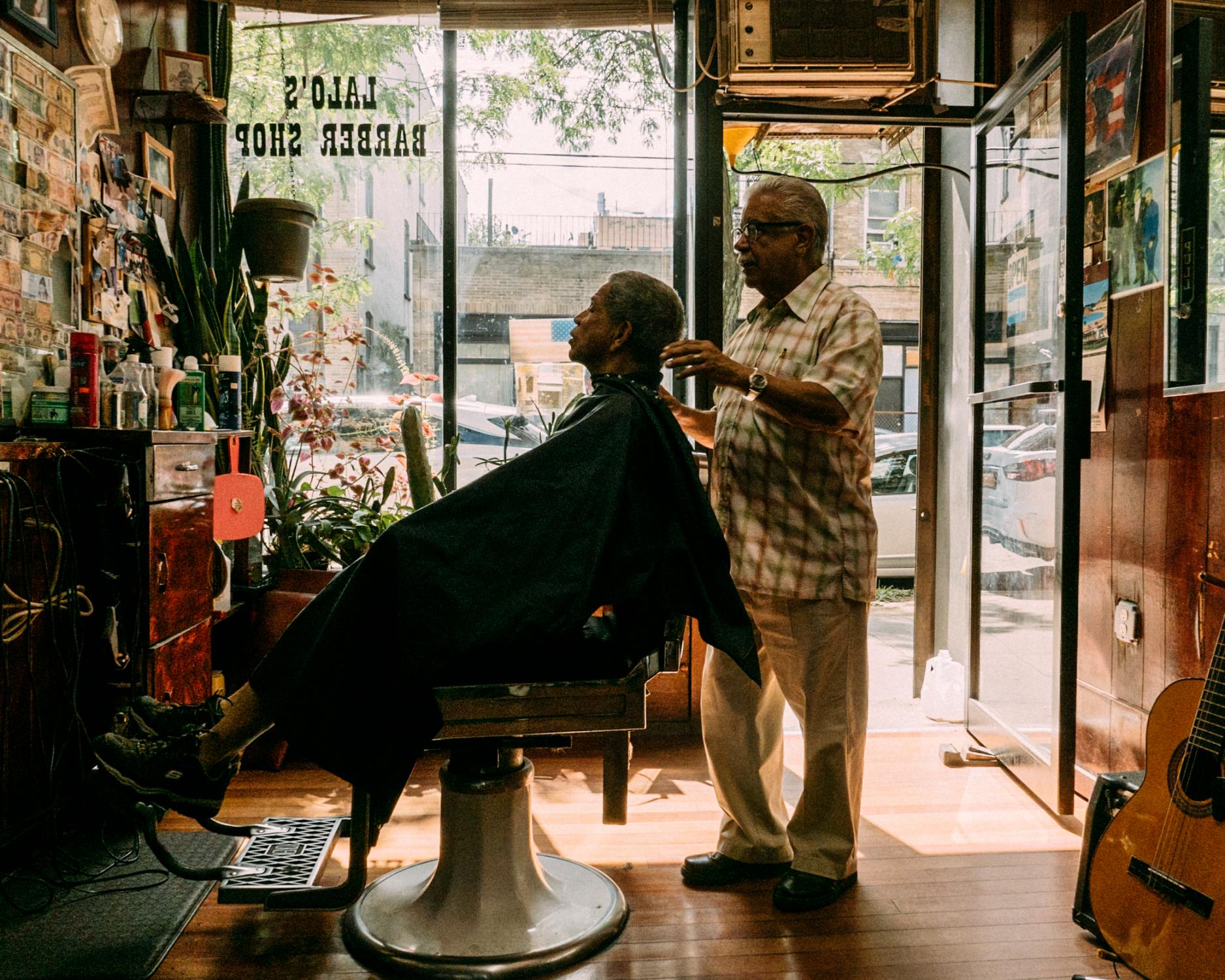 As the warm morning light of the summer begins to peak over the Bushwick skyline, the shop fills up with laughter and stories as Eladio Burgos, 77, cuts the hair of the day's first customer. 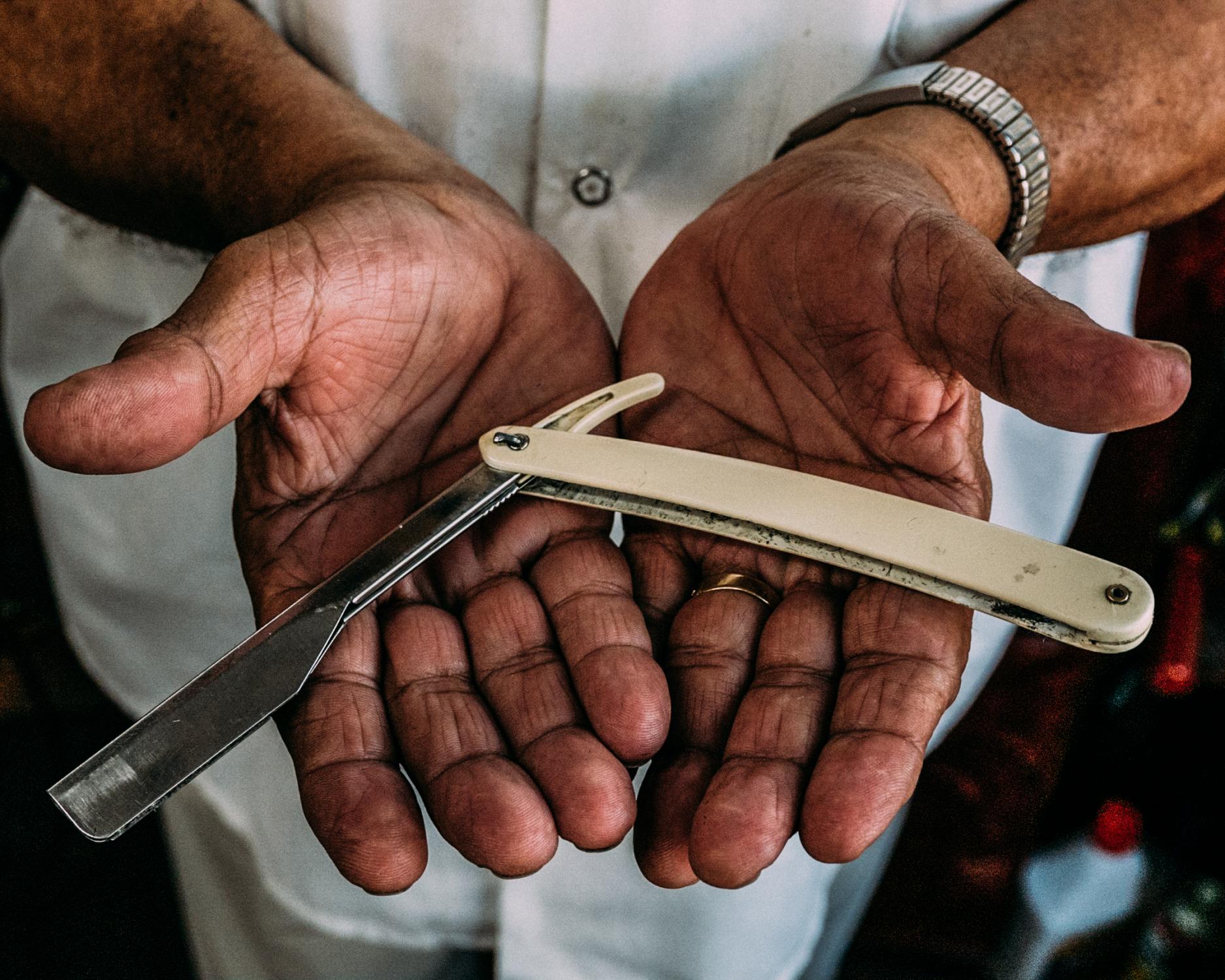 Standing in the barbershop he founded four decades prior, Eladio Burgos, 77, displays one of his straight razors at his barbershop, on Suydam Street and Wyckoff Avenue, as he tells tales of the blocks "wild west" days. 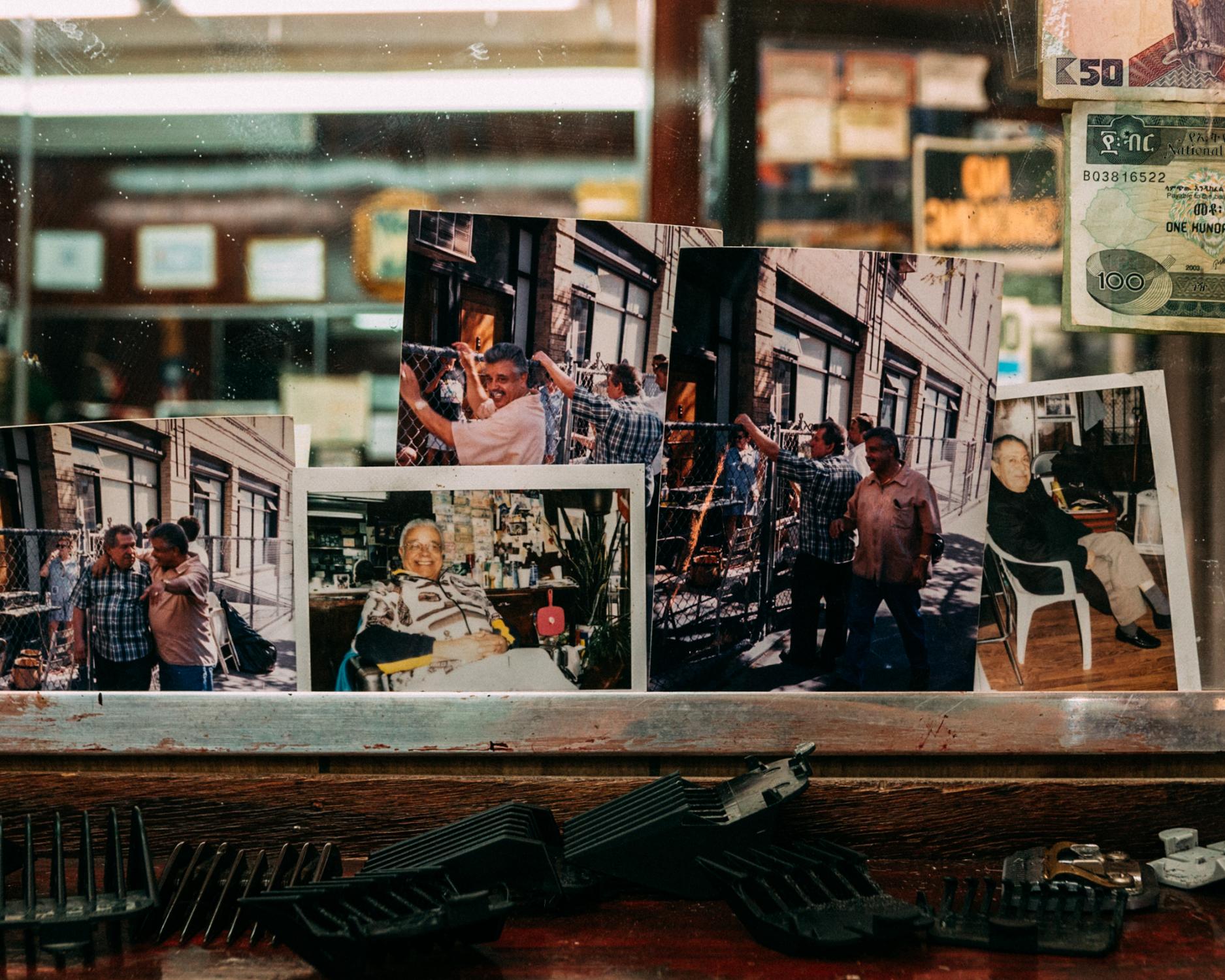 Photographs displaying moments from the barbershop's earlier years hang above a shelf inside the barbershop created out of a small garage on Suydam Avenue in the Bushwick neighborhood of Brooklyn. 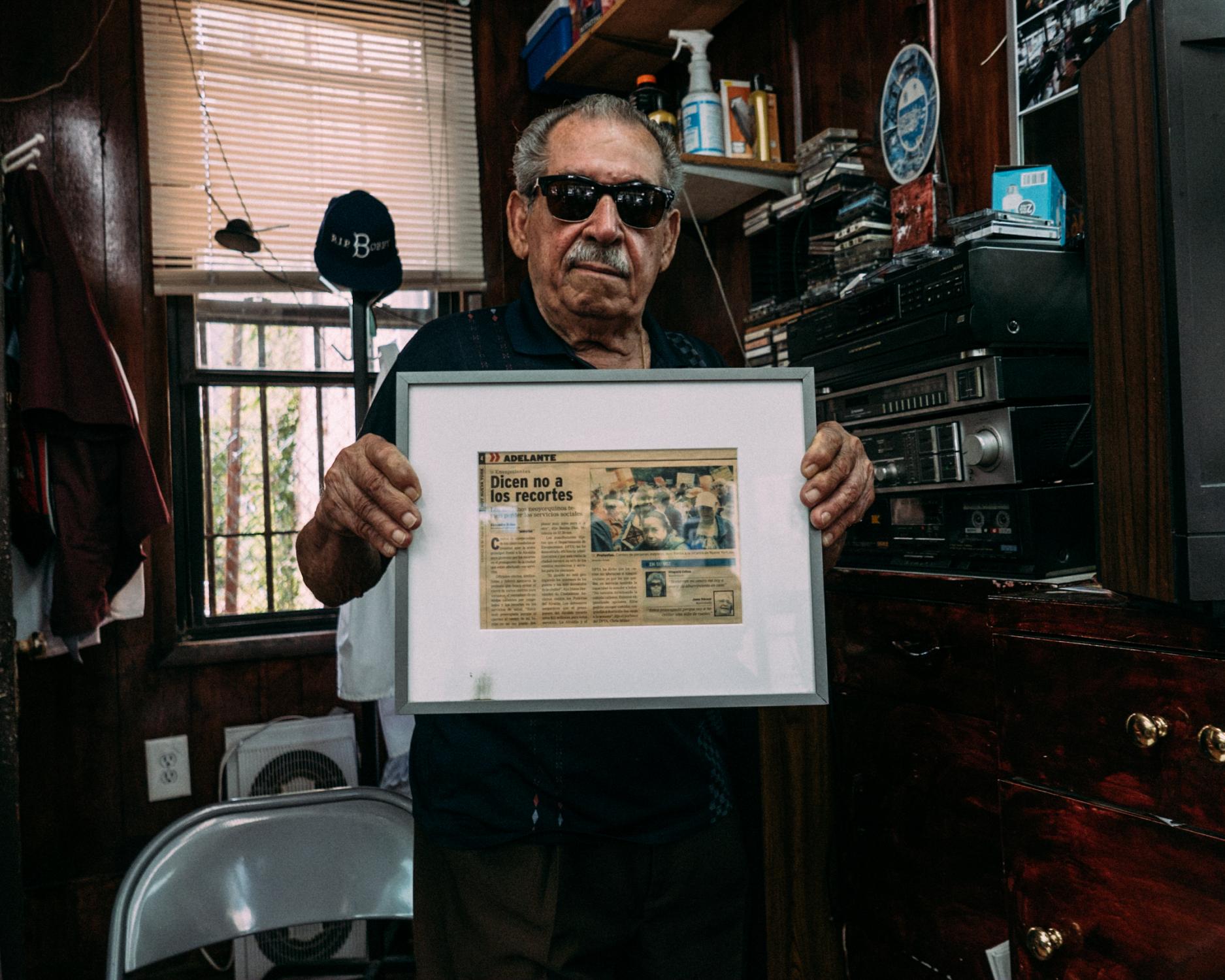 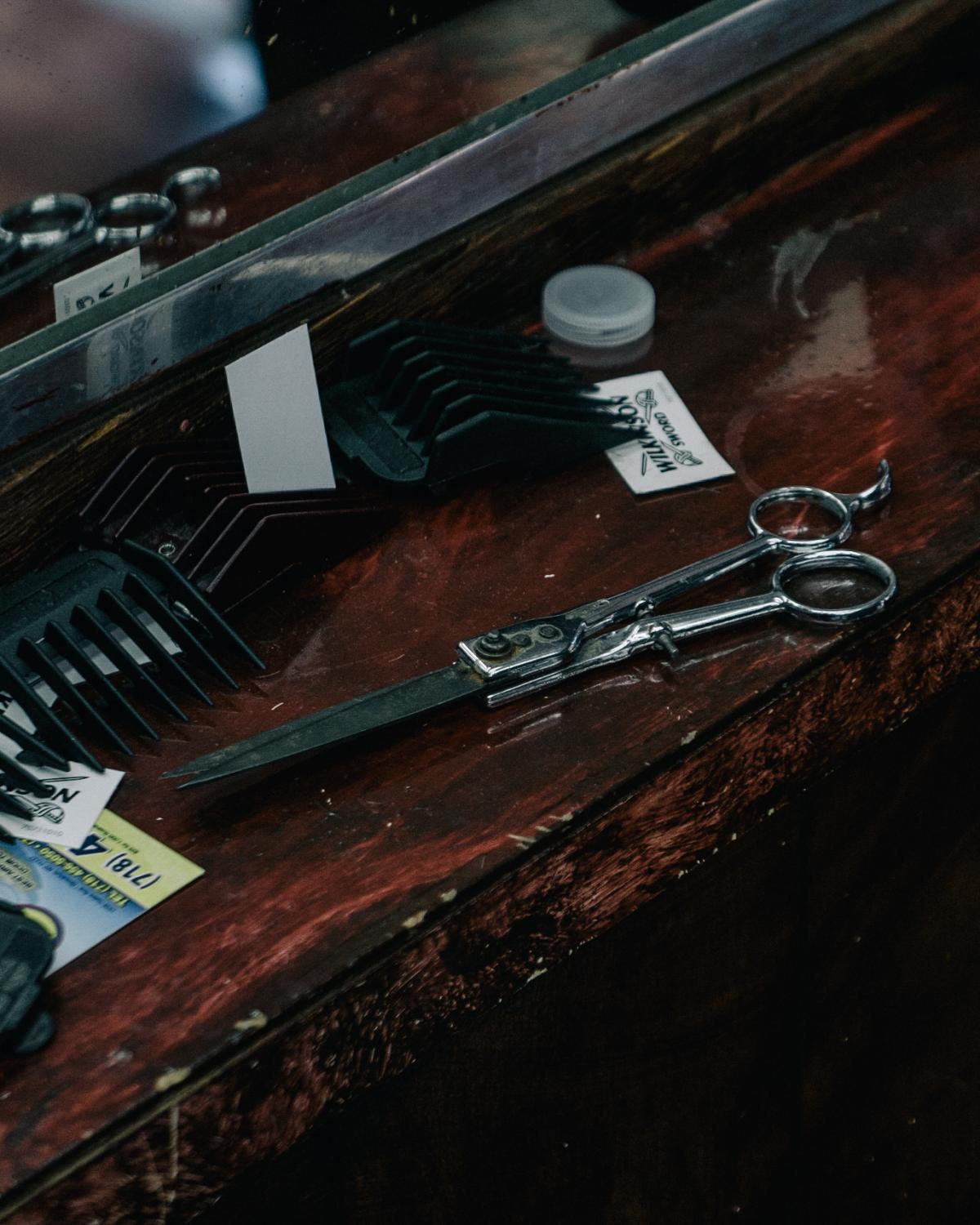 A pair of scissors and various electric clipper guards wait to be used by Eladio as an evening rush of clients wait for their weekly haircut at the petite barbershop in Brooklyn. 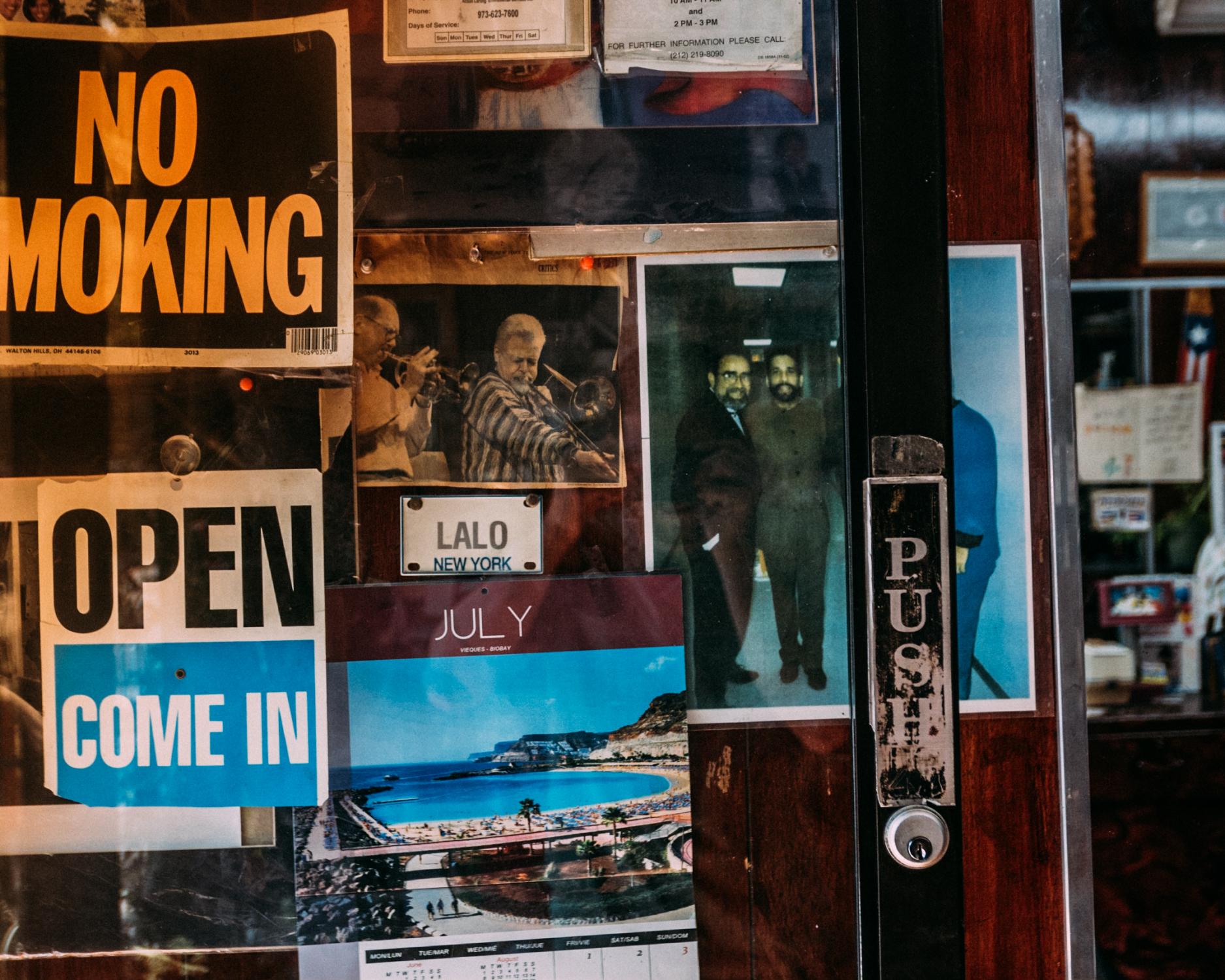 A miniature New York State license plate reads "Lalo", Eladio Burgos' nickname, hangs amongst photographs of his favorite Puerto Rican musicians at the entrance of his small barbershop in Bushwick. 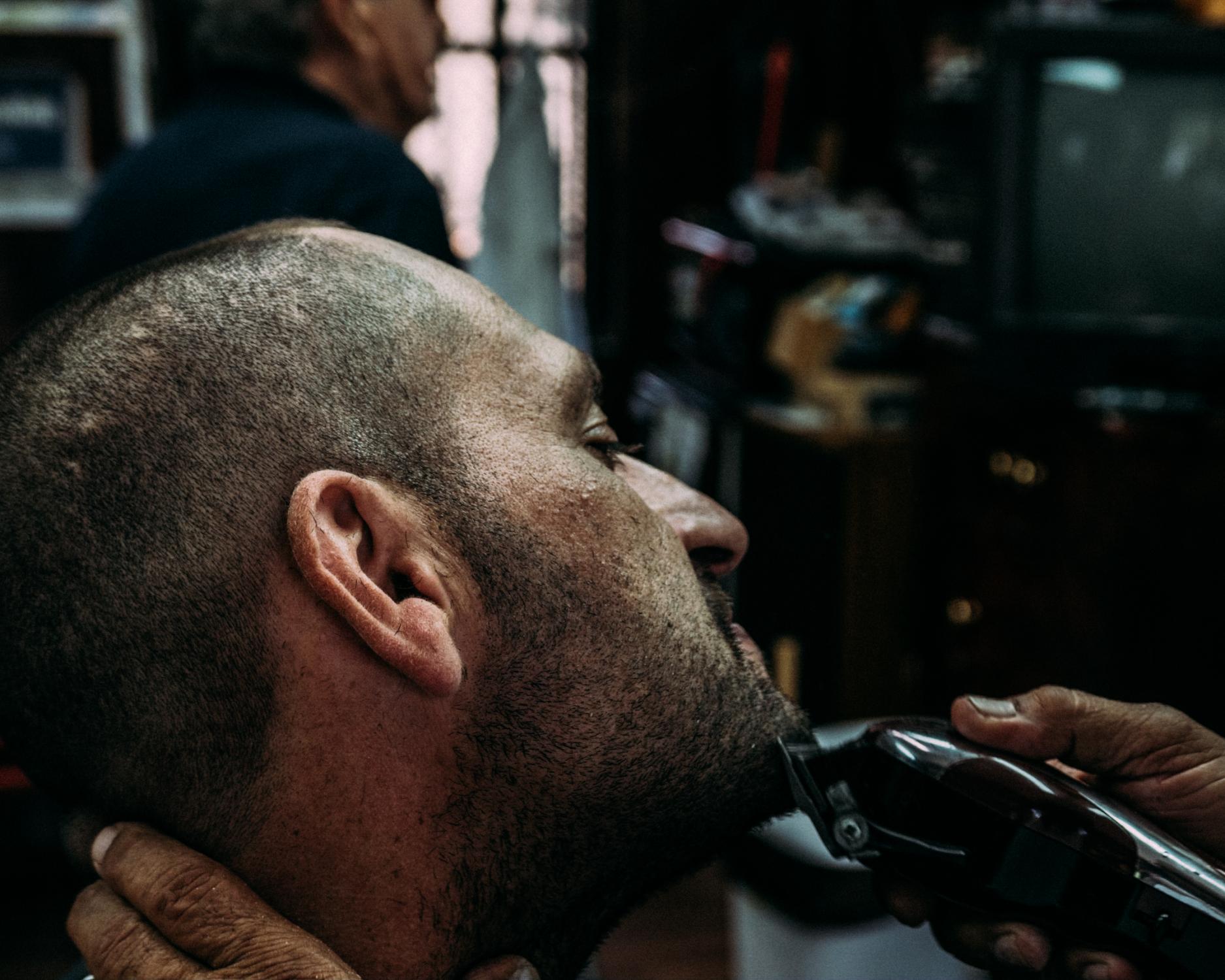 The shop is open from 9 am to 6 pm sharp, except summer nights. During the warmer months, Eladio and old friends spend time playing dominoes and listening to traditional Puerto Rican music in-between haircuts. Here, Eladio finishes up the final hair cut of the night before starting "la janguear" (the hang out). 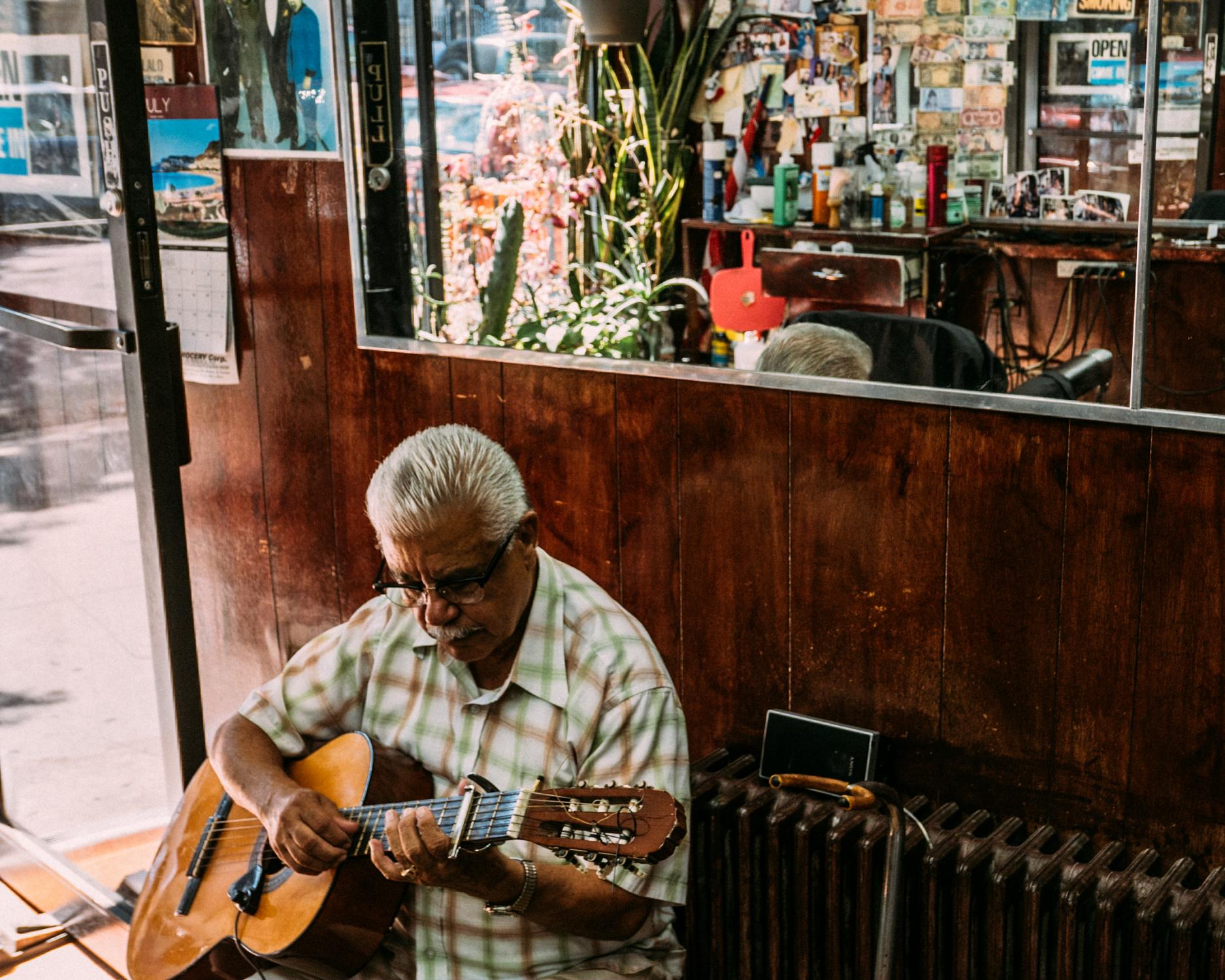 During the first few hours of the day as the shop is relatively quiet, Eladio utilizes the opportunity to tune his guitar and play some classical music from Puerto Rico. 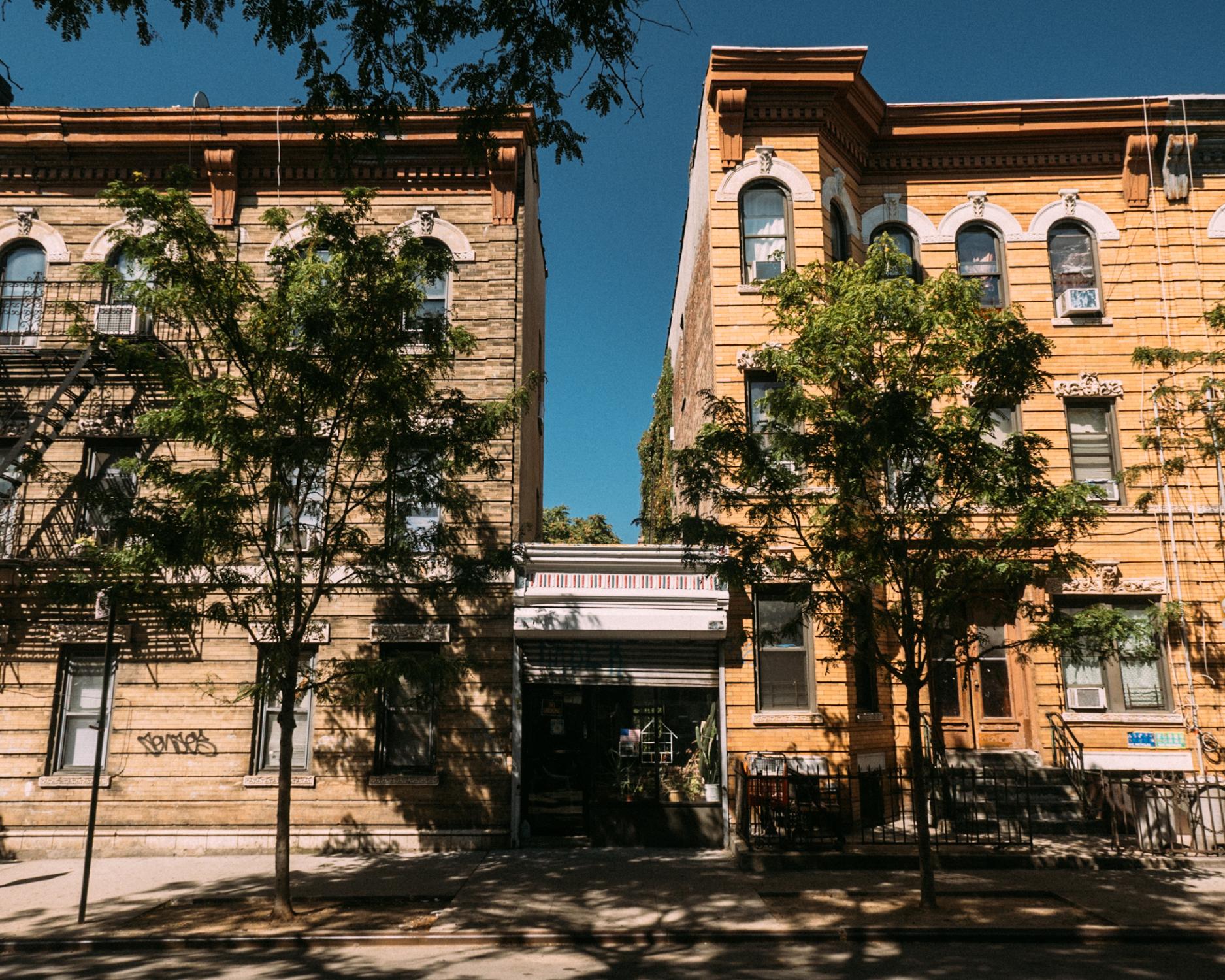 Eladio's barbershop, on Suydam Avenue, has been squished between these two apartment buildings in Bushwick for the last 40 years. 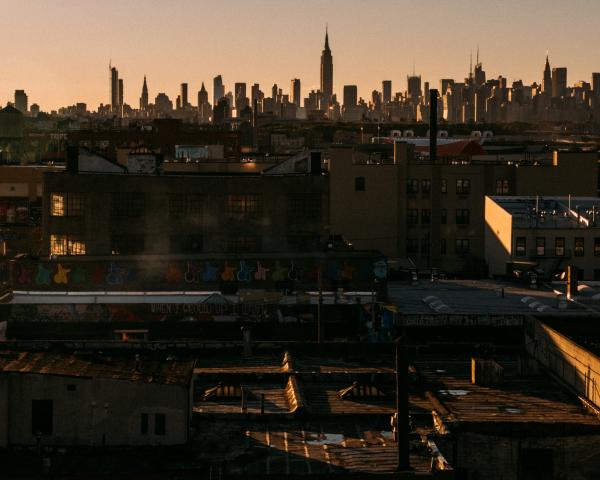 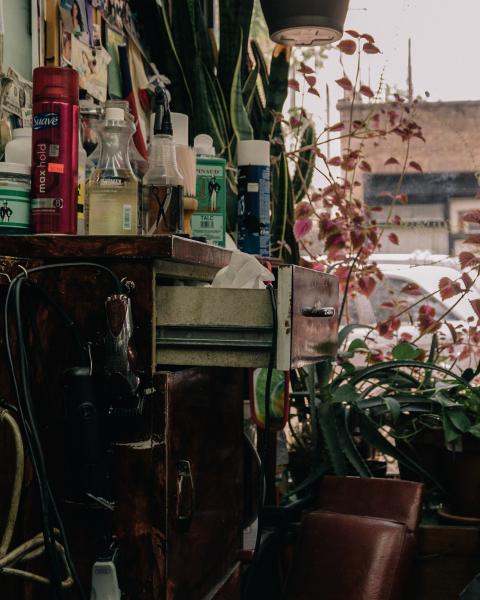 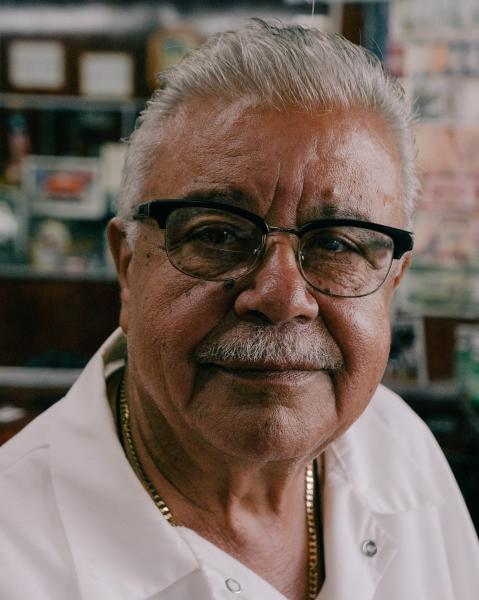 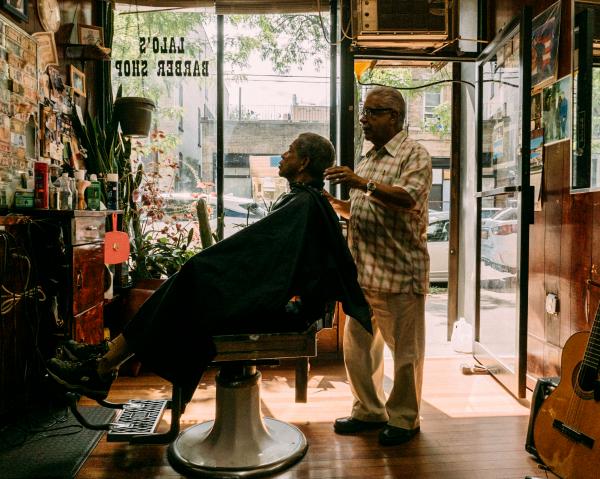 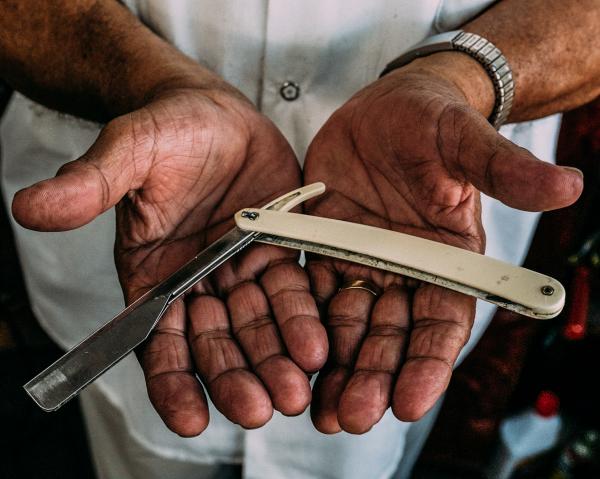 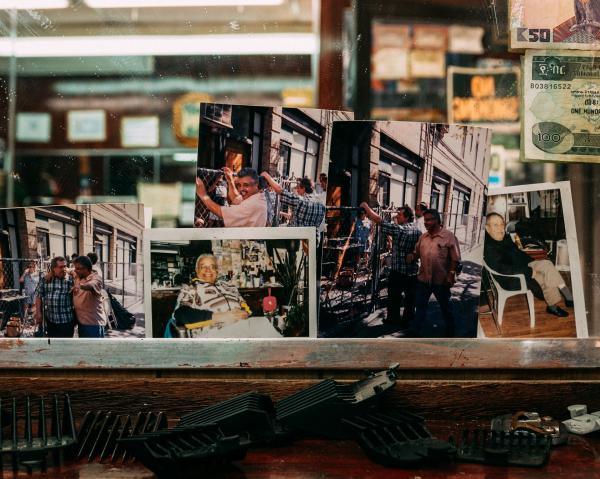 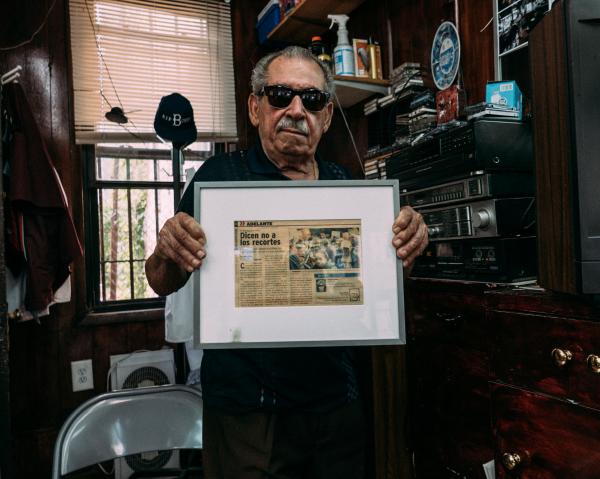 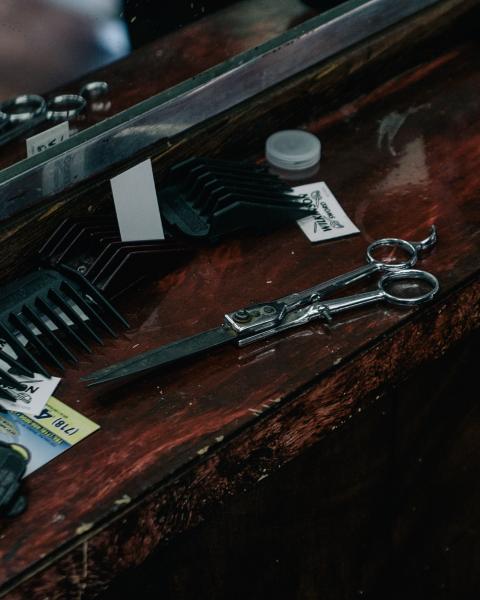 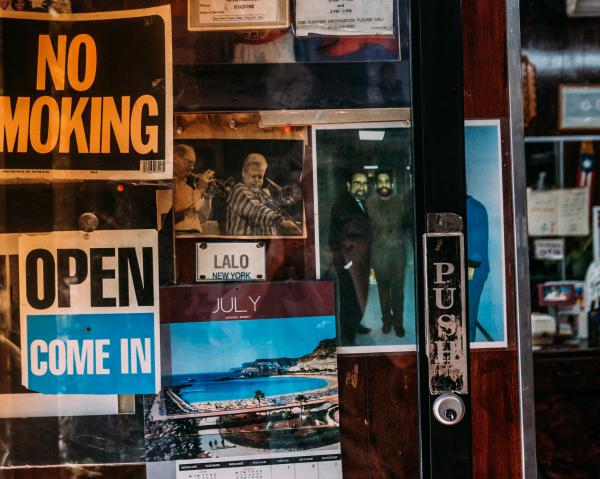 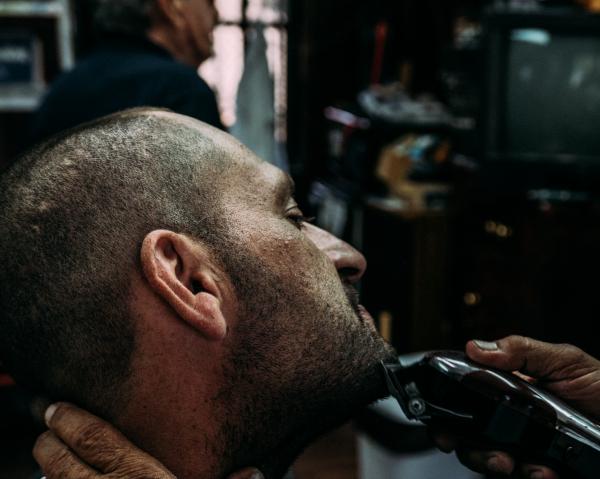 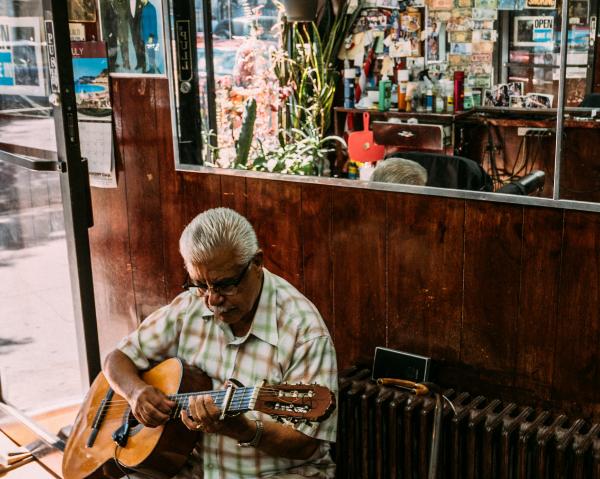 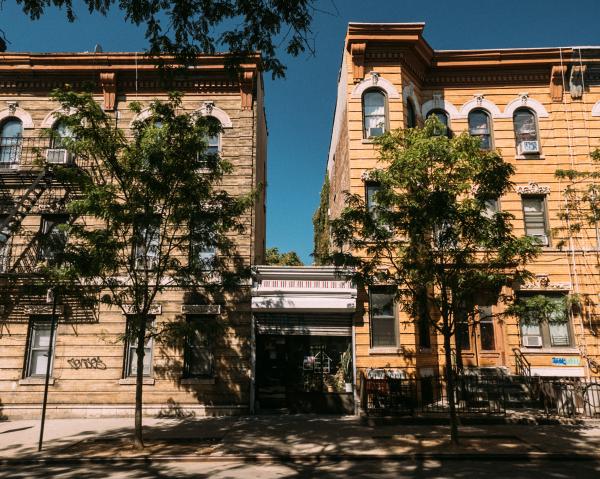